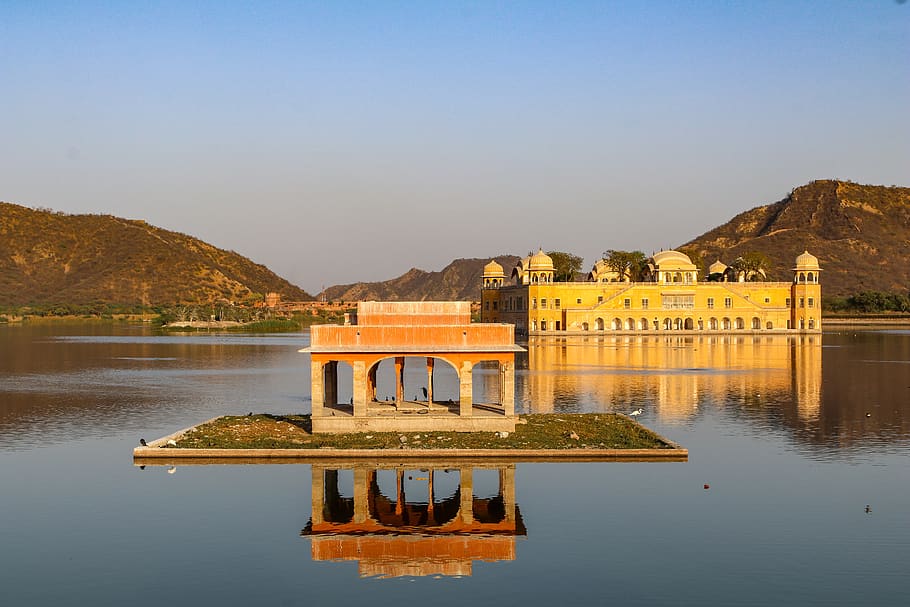 It offers a breathtaking view of the Nahargarh hills and Man Sagar Lake that border it. The most alluring feature of this mahal is that four storeys of this site are submerged underwater, and only one storey lies above the water level. It has a garden at the top that consists of varieties of trees and beautiful flowers.

Jal Mahal is extremely popular among the visitors for it’s striking architecture and detailed craftsmanship. This palace has been built by combining Rajput and Mughal style of architecture. Due to it’s alluring beauty and rich architectural magnificence it has also been touted as one of the most photographed sites in India. The entry is prohibited inside the fort but you can have a view of this magnificent fort from a considerable distance

History
Jal Mahal, one of the top places to visit in Jaipur, doesn’t have any recorded history about who built it or when. However, it is popularly believed that Maharaja Sawai Pratap Singh constructed Jal Mahal in 1799 to serve as a hunting lodge during his duck shooting trips. Some people also credit Maharaja Madho Singh I for the construction of this palace and date its origins back to the 1750s. Regardless of who built the palace, it was never meant to be used as a regular palace for living.

Later, the palace was renovated by Maharaja Jai Singh II of Amber in the 18th century. Over the years, the structure suffered subsidence due to partial seepage of lake water and waterlogging issues. After several years of deterioration and neglect, renovation works were carried out in the early part of the 21st century to restore the palace into its former glory. Though the palace and many of its features have been restored, its original terrace garden could not be salvaged. Plans are on to create a new terrace garden modeled on the rooftop garden of the famous Amer Palace in Jaipur

Architecture
Jal Mahal stands in the middle of a lake that has a maximum depth of 15 feet and a minimum depth of 4.9 feet. It is a five-storied structure built in the Rajput style of architecture, with influences of the Mughal architectural style. While four of its stories remain under water, only the top story remains visible, giving you an impression that the palace is floating on the waters of the lake.

Jal Mahal has been constructed out of red sandstone. Four elaborate chhatris designed in octagonal shape adorn the four corners of the palace. A huge Bengal-style rectangular chhatri also exists on the roof of the palace. In its heyday, the terrace garden of Jal Mahal was decorated with arched passages.

Interesting Jal Mahal Facts
It is also known as Romance Palace because of its exotic environment and architecture.
Kings use to spend their leisure time in this palace with their ladies.
The reflection of the palace in lake gives illusion of multi storeys.
Actually only one storey is over the water level.
Decorative lights brighten up the palace in night.

Importance
However, it is popularly believed that Maharaja Sawai Pratap Singh constructed Jal Mahal in 1799 to serve as a hunting lodge during his duck shooting trips. Some people also credit Maharaja Madho Singh I for the construction of this palace and date its origins back to the 1750s.

Best Time To Visit
The best time to visit Jal Mahal is during the rainy season when the weather becomes even more pleasant. The rain imparts a great edge to the stunning look of the sandstone of this palace and makes it look extremely stunning. People especially prefer to visit this spot during October as the weather is extremely pleasant during this month.