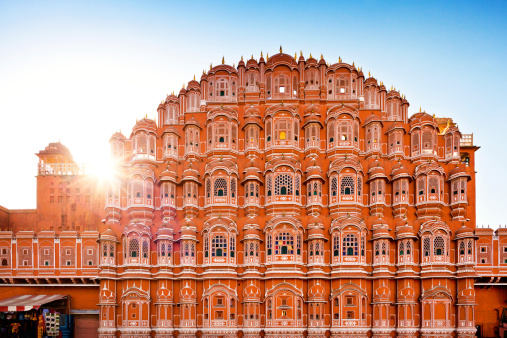 History
Hawa Mahal was built by Kachhwaha Rajput ruler Maharaja Sawai Pratap Singh in the year 1799. When the maharaja saw the structure of Khetri Mahal in Jhunjhunu, Rajasthan, he was so impressed that he decided to build a palace modeled on it. Hawa Mahal, also called the Palace of Breeze, was the result of that inspiration.

This five-storied structure was designed by Lal Chand Ustad as an extension of the City Palace. Starting from the City Palace’s edge, Hawa Mahal extends to the women’s chambers aka zenana. During those days, the Purdah system was strictly followed and Royal Rajpur women weren’t allowed to show their face to strangers or even appear in public. The palace comprises 953 windows which enabled them to get a glimpse of the day-to-day activities and festivities happening on the street below without appearing in public.

Architecture
Hawa Mahal, one of the best places to visit in Jaipur, features a splendid fusion of Islamic, Mughal, and Rajput architectural styles. Its domed canopies, floral patterns, lotus motifs, and fluted pillars, all reflect the rich Rajput style. Complementing these elements is the filigree work in stone and lavish arches, both of which draw influence from the Islamic style of architecture.

Designed in red and pink sandstone, this one-of-its-kind palace boasts of a pyramidal shape. It has five stories and rises up to a height of 50 feet. The 953 windows featured on the front part of the palace lend it a honeycombed hive look. Thanks to the exceptional latticework on these windows, the palace experiences a cooling effect as the breeze blows in through them. Delicately designed hanging cornices are another attractive aspect of Hawa Mahal’s architecture.

The interiors of the palace consist of pillared chambers and minimally ornamented corridors that reach up to the top floor. Patios adorn the front part of the first and second floors. Unlike the lower two floors, the top three floors have a width that’s not more than a single room. There are fountains adorning the center of the building’s courtyard.

Things to Do
Of course, one thing that you can indulge in Jaipur is shopping. Shop to your heart’s delight at the various stalls and shops nearby and buy memorabilia, handicrafts, clothes, bags, footwear, jewelry and so on. Do bargain well.

Interesting Facts About Hawa Mahal
1.It was an architect named Lal Chand Ustad who designed Hawa Mahal. Built in red and pink sand stone, the Hawa Mahal is not actually a palace but more of a gallery, used by royal women of those times.
2.The architectural style is a combination of Hindu-Rajput-Islamic styles. The fluted pillars, floral patterns, lotus motifs, canopies symbolise Rajput architecture while the filigree work, arches, etc are derived from Islamic architecture. Nevertheless, the combination looks so amazing that you may want to spend hours admiring the craftsmanship and beauty of Hawa Mahal.
3.The architectural designs also resemble honey comb.
4.It is also believed that the Hawa Mahal is shaped like Lord Krishna’s crown, as Sawai Pratap Singh was an ardent Krishna devotee.
5.You enter Hawa Mahal complex through an imposing door, and you step into a beautiful courtyard. There are two-storied buildings on three sides. Hawa Mahal is on the east side.
6.One of the floors is actually known as Vichitra Mandir or the strange floor. It is said that this was the favorite spot of Sawai Pratap Singh, who spend hours sitting here praying to his favorite deity, Lord Krishna and composing poems in praise of the Lord.
7.To enter Hawa Mahal, you have to go through the rear end and not from the front.
8.Hawa Mahal is a delight to look at when the early morning sunlight falls on the structure, lighting it up it in its style.
9.Hawa Mahal is now under the care or ASI or the Archaeological Survey of India.
10.A museum is housed in the premises where ancient artefacts of Rajput rulers and region are displayed.
11.A unique feature about Hawa Mahal is that it does not stand on a foundation, the tallest such building in the world. Since there is no foundation, the structure stands at a leaning position at 87 degrees.
12.Another interesting feature about the architecture is that though five-storied, there are not stairs to reach the floors but only ramps.

Importance
Hawa Mahal looks like a crown of Lord Krishna, which is significant to the devotion of Sawai Pratap Singh in Lord Krishna. It is believed that it was built so that the Royal ladies could enjoy the street functions and festivals without being revealed to the audience, without any disagreement to their Purdah System

Best time to visit
The palace was renovated in 2006 at an estimated expense of 4.568 million rupees to lend it a facelift. The best time to visit Hawa Mahal is during the sunrise and sunset hours when the golden sun rays light up the whole red and pink structure in a spellbinding manner.