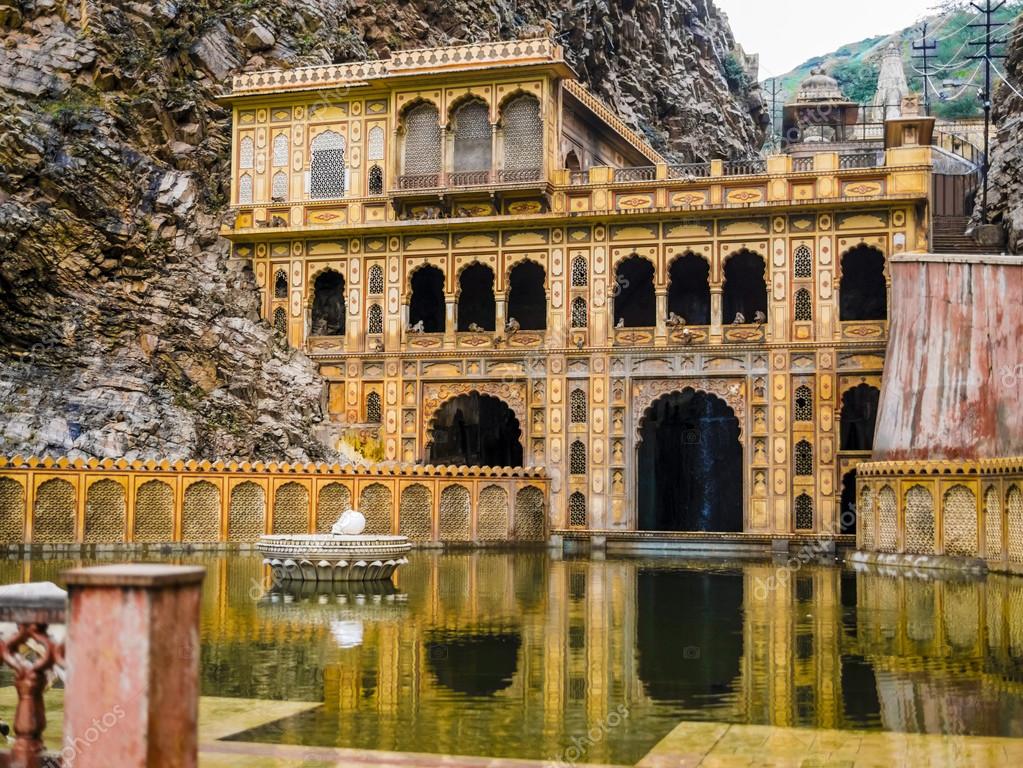 It is situated in the Aravalli hills and is bound by thick plush trees and bushes. This remarkable building is decorated with painted walls, round roofs and pillars. Apart from the kunds, this pre-historic Hindu pilgrimage place also has temples of Lord Ram, Lord Krishna and Lord Hanuman within the temple. One of the main tourist destinations of Jaipur, the temple complex boasts of natural freshwater springs and seven holy ‘kunds’ or water tanks. Among these kunds, the ‘Galta Kund’, is the holiest one and is believed never to get dry. Pure and clear water flows from the ‘Gaumukh’, a rock shaped like a cow’s head, into the tanks.
This spectacular temple is designed to look more like a grand palace or ‘haveli’ than a traditional temple. The Galta Monkey Temple has a scenic and gorgeous landscape featuring rich green vegetation and has a spectacular sight of the Jaipur city. This temple is known for the many tribes of monkeys that are found here and the religious hymns and chants, along with the natural setting, offer a peaceful ambience to tourists.

Architeture
It features traditional Rajputana architecture with richly ornamented facades, fresco paintings, haveli architecture, pavilions with Kunds and natural water springs. Join the walk to explore the various facts and stories behind the temple complex and the importance it holds for the city.

Things to Do
1.Take a dip in the holy waters of the kunds.
2.Watch the beautiful sunset from the sun temple.
3.Feed peanuts and bananas to the playful monkeys.

Interesting fact about Galta Temple
1.The temple was built in the 18th century and since then has been one of the pilgrim sites for the Hindus.
2.The temple was built under the supervision of Diwan Rao Kriparam who was an attendant to Sawai Jai Singh.
3.A saint named Saint Galav is said to have spent 100 years here doing his tapasya and as a tribute a temple is named after him.
4.The water in the kunds are considered to be holy and never dry out.
5.Taking a dip in these waters is said cleanse all the sins of a person.
6.This temple is adorned with beautiful architecture and paintings on the walls and pillars that give people an idea of the Hindu Mythology.
7.Galta Ji is a dwelling ground for a number of monkey tribes that happen to be very friendly with tourists.
8.The sunsets from the sun temple is phenomenal and is a must watch while visiting Jaipur.

Importance
It is believed that the temple was built by Diwan Rao Kriparam back in the 15th century, and has been an important location for meditation yogis since the 16th century. It is named after Saint Galtav who spent his life meditating here

Best Time to Visit
The temple is open all days of the year between 5:00 AM to 9:00 PM. Entry is free for all irrespective of nationality or faith. Best Time To Visit Galta Ji Jaipur: The best time to visit Galta Ji in Jaipur is, between February and March as well as between October and December.