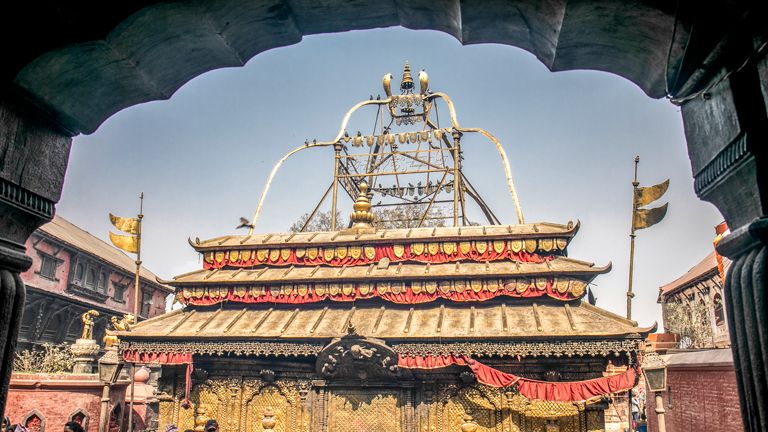 Note:- This route may cross the border so your destination is ifferent time zone

History:-Guhyeshwari Shaktipeeth Temple dedicated to Goddess Guhyeshwari or Adi Shakti is one of the 51 Shakti Peeth Temples located near Pashupathinath Mandir in Kathmandu, Nepal. Devi’s two knees fell here and the idols are Devi as Mahamaya and Shiva as Kapali. The temple name originates from the Sanskrit words Guhya (Secret) and Ishwari (Goddess). In Lalitha Sahasranama the 707th name of Goddess is mentioned as ‘Guhyarupini’ meaning The form of Goddess is beyond human perception and it is a secret.

Pashupatinath and Guhyeshwari are beautiful representations of the Shiva and Shakti unity. Located at the banks of River Bagmati, the temple portrays the female side of the divine. Guhyeshwari is also known for its Tantrik rituals (esoteric tradition of Hinduism). It is believed that people who want to gain strength visit this temple to worship Mother Goddess.

The pagoda-style temple has a distinct interior. Instead of a standing figure of the Goddess, it has a flat figure parallel to the ground that is worshipped by bowing down. Next to the divine figure is a pond, the Bhairav Kunda. Devotees put their hand inside the pond and whatever they get is considered holy and is accepted as a blessing from the divine.

The temple is also mentioned in the sacred texts of Kali tantra, Chandi tantra, Shiva tantra Rahasya as one of the most important places for gaining the power of tantra. The Vishwaswarup of goddess Guheshwori shows her as a many and different color headed goddess with innumerable hands. The temple possesses divine female energy force and is considered as the most power full tantra peeth as it is built above seventeen cremation ground.

The Newar community performs various pujas at Guhyeshwari Temple. Newari Bhoj (feast) is also held at the temple during festivals. Newar Bajracharya Buddhists worship Guhyeshwari as Vajrayogini. This temple has great value to Hindus as well as the Buddhists. During the first 10 days of Dashain (Navaratri), the main festival of the Hindus, devotees from all over Kathmandu come to worship Goddess Guhyeshwari. A lot of importance is placed in visiting this temple during this time. Statues of different forms of Durga (Hindu Goddess) are also placed around Guhyeshwari Temple at this time.

While visiting these temples, the Guhyeshwari Temple is visited before the main Pashupatinath Temple. The Guhyeshwari Temple is worshipped first and then other temples are visited. It is because of the belief of worshipping Shakti before Shiva. There are 51 Shakti Peetas across the country, of these 4 are considered as Adi Shaktipeeth and 18 as Maha Shakti Peethas. Book Tour Package to Guhyeshwari Shaktipeeth Temple Kathmandu Nepal.

Importance
It is an important pilgrimage destination for Hindus, especially for Tantric worshipers. King Pratap Malla built this temple in the 17th century. The goddess is also called Guhyekali.
…