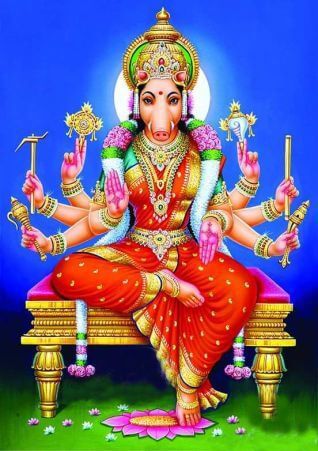 The art and architecture of this Shakti Peeth is adorable. The stone that is used in the construction of this Shakti Peeth is really different and the glows when the sunlight falls on it. The enchanting views that is presented by the Shakti Peeth when it image falls in the water body, that is located just adjacent to it are mesmerizing. History to this place dates back in the time when it is said that the Lower teeth of Maa Sati fell to this place. Alternatively, according to the Matsya Purana it is also believed that Maa Varahi was created by Lord Shiva from the incarnation of Lord Vishnu –Varah (boar form) to kill a demon, who is mainly worshipped at nocturnal
Importance
If you desire prestige, honour and dignity, then Varahai Mata Mandir, Kashi is the right place for you. Your search to fulfil your desires ends here. If you are facing obstacles in your life, then this religious temple is the answer. Tantric practitioners also worship Varahai Mata.

Temple Timings:-05:30 AM and 07:30 AM
Know more about other shakti peetha’s visit this link
https://swiggywala.com/the-shakti-peethas/