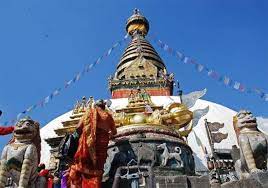 Note:- This route may cross country borders. so your destination is in a different time zone.

History:-Gandaki Shakti Peeth is one of the 51 Shakti Peethas. As per the legend, King Daksha, father-in-law of Lord Shiva, organized a yajna, in which King Daksha did not invite Lord Shiva and his daughter Sati because he did not consider Lord Shiva as his equal. Mother Sati found it insulting and went to his father’s place to question him about this affront. After reaching there, King Daksha said offensive words against Lord Shiva, which outraged her, and she jumped into the Havan Kund. When came to know, Lord Shankar reached there and took out the body of Mata Sati from Havan Kund and started doing Tandava, which caused upheaval in the entire universe. To save the whole world from this crisis, Lord Vishnu divided the body into 51 parts with his Sudarshan Chakra, the organs/ornaments where they fell became the Shakti Peethas.

Importance
Importance for Hindus: The Muktinath Temple is the place to attain Salvation or Nirvana. Besides natural fire representing Brahma and the holy waters, Lord Vishnu is worshipped at Muktinath Mandir in the form of ammonites (shilas) known as Salagrama Shilas.

The “head” of Mata Sati fell in the Gandaki Shakti Peeth. Here Mata Sati is known as ‘Gandaki Chandi’ and Lord Shiva as ‘Chakrapani.’

Temple Timings:- 5:00 AM to 8:30 PM
Know more about other shakti peetha’s visit this link
https://swiggywala.com/the-shakti-peethas/