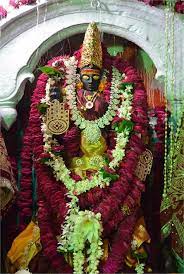 How to Reach:-
From West:– Jaipur-> Agra-> Azamgarh-> Dhanbad-> Durgapur-> Mangal Chandi Temple, aproxi 1,490km
From North:– Sikkim-> Raiganj-> Malda-> Mangal Chandi Temple, aproxi 585km
From South:- Cuttack-> Mindapore-> Kolkata-> Burdwan-> Mangal Chandi Temple, aproxi 530km
History:-The proud King Dakshya summoned a yajna but intentionally avoids inviting his daughter Sati and her husband Lord Shiva as Dakshya was not that fond of his son-in-law. When Sati reached the yajna ceremony uninvited, the abominable king insulted her and Lord Shiva like anything. Out of rage and pain, the devi then and there self-immolated herself leaving behind the corpse. When Lord Shiva came across this fact, He immediately took the form of Birbhadra and chopped off the head of Dakshya and took the corpse of the Devi and started mourning. To help Him out of His pain and to save the world, Lord Vishu sent the Sudarshan Chakra to mutilate the body of the Devi. When that happened the body was cut off in 51 pieces. The right wrist of the Devi fell at this place and formed the Shakti Peeth.
Importance
Moreover, Durga is called Chandi, and the son of Earth is named Mangal. The ‘right wrist’ of Goddess Sati is said to be fell at Mangal Chandika Shakti Peeth. The spiritual powers of Goddess Sati and Lord Shiva are placed in the form of ‘Mangal Chandika’ and ‘Kapilambar,’ respectively.