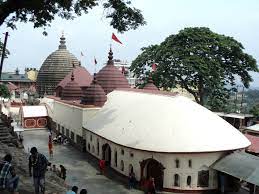 How to reach:-
From East:-Manipur-> Dimapur-> Hojai-> Nagaon-> Kamakhya Temple , aproxi 500km
From West:– Patna-> Biratnagar-> Bongaigaon-> Nalbari-> Kamakhya Temple , aproxi 900km
From South:-Kolkata-> Malda-> Siliguri-> Bongaigaon-> Nalbari-> Kamakhya Temple , aproxi 1,030km
History:-
According to the Kalika Purana, Kamakhya Temple denotes the spot where Sati used to retire in secret to satisfy her amour with Shiva, and it was also the place where her yoni (genitals, womb) fell after Shiva tandav (dance of destruction) with the corpse of Sati. It mentions Kamakhya as one of four primary shakti peethas: the others being the Vimala Temple within the Jagannath Temple complex in Puri, Odisha; Tara Tarini) Sthana Khanda (Breasts), near Brahmapur, Odisha, and Dakhina Kalika in Kalighat, Kolkata, in the state of West Bengal, originated from the limbs of the Corpse of Mata Sati. This is not corroborated in the Devi Bhagavata, which lists 108 places associated with Sati’s body, though Kamakhya finds a mention in a supplementary list.

The Yogini Tantra, a latter work, ignores the origin of Kamakhya given in Kalika Purana and associates Kamakhya with the goddess Kali and emphasizes the creative symbolism of the yoni.
Importance:-
Counted among the most sacred shaktipeethas (devotional shrines where the severed body parts of Goddess Sati fell), the temple is believed to be the place where the womb of the goddess fell. Thus, it is also synonymous with supreme female power and fertility.

Temple Timings:- 8:00 AM TO 1:00 PM
Know more about other shakti peetha’s visit this link
https://swiggywala.com/the-shakti-peethas/