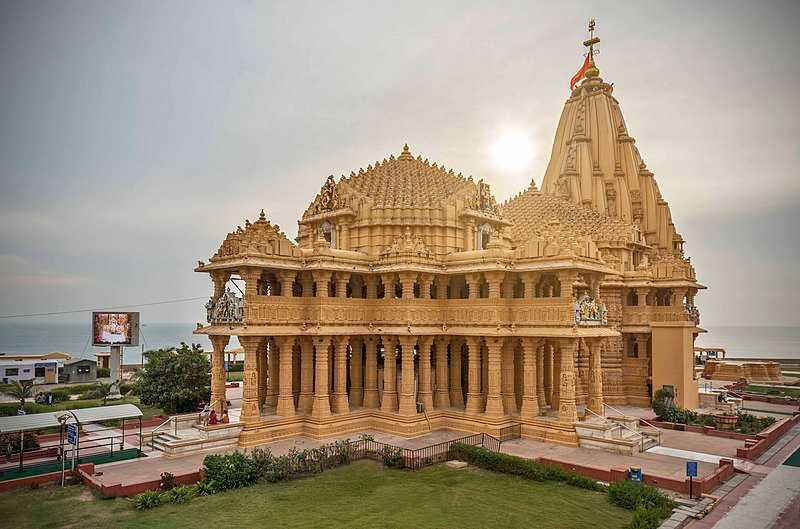 Somnath itself doesn’t have an airport but is connected to multiple cities via the Aerodrome at Diu in the union territory Of Daman and Diu. However, there is only one flight daily operated by Air India Regional. Also, other airports are fairly close by such as the Porbandar airport which is about 120 km and the Rajkot Civil Airport, which is about 160 km away. Porbandar has flights from Mumbai as well as other cities. Rajkot is a much bigger airport which is also serviced by multiple airlines such as Air India and Jet Airways.

Nearest Airport: The closest airport by distance is the Diu Airport, which is about 63 km away from Somnath. There are regular taxi services from Diu to Somnath along with commuter buses as well as luxury bus services. The closest International Airport is the Sardar Vallabhai Patel Airport in Ahmedabad. Bus services, as well as car rentals, are also available from there to Somnath.

Safety Suggestion: Diu and other airports around the western coast of India are usually safe to travel to, except during the monsoon season when the passengers could face major turbulence due to the monsoon winds, cloud formations, and pockets of low pressure in and around the coastal areas. However, there’s no recorded history of any mishaps in the past.

Buses are the best mode of travel to Somnath from the cities nearby as there are multiple options available. Somnath is surrounded by many small towns and cities which are connected well by bus services, both Non-ACs as well as luxury AC buses. Air-conditioned buses from Diu to Somnath will cost 300 per person. Bus fares from other close-by places such as Rajkot, Porbandar, and Ahmedabad are also widely available and operated by private bus owners. These are priced reasonably and vary only by km travelled and the quality of the buses.

Journey Suggestion: The roads in and around Somnath are very well connected to other smaller cities which have airports. Even among the bigger cities such as Ahmedabad, the roads are usually in good condition. The closest national highway that leads straight to Somnath is NH 51 and there are also other state highways which lead there from smaller cities.

3.By Train:-The closest train station from Somnath is the Veraval Railway Station, which is well connected to the major cities of the region such as Mumbai and Ahmedabad and has 14 pairs of trains to and from important cities daily. The Veraval staion is only 5 km from the city of Somnath and has daily trains plying from all major cities.

Story:-
Considered to be the first of the 12 Jyotirlingas, the Somnath Temple in Gujarat is situated near Veraval in (Prabhas Kshetra) Kathiawad district. This jyotirling in Gujrat is a highly revered pilgrimage site in the country. There is a legend related to how this Jyotirling in Gujarat came into being. According to the Shiva Purana, the moon was married to 27 daughters of Daksha Prajapati, out of which he loved Rohini the most. Seeing his negligence towards the other wives, Prajapati cursed moon that it would lose all its radiance. A disturbed moon along with Rohini came to Somnath and worshipped the Sparsa Lingam after which he was blessed by Shiva to regain his lost beauty and shine. On his request, Lord Shiva assumed the name Somchandra and resided there eternally. He became famous by the name Somnath. Ever since the Somnath Jyotirlinga has been destroyed and rebuilt many times in history.
Temple opening hours: Every day from 6 AM to 9 PM. Aarti takes place at 7 AM, 12 noon and 7 PM. The famous light and sound show; ‘Joy Somnath’ takes place every day between 8 to 9 in the evening.


For the information of all other jyotirlingas go through the below link
https://swiggywala.com/asevh/