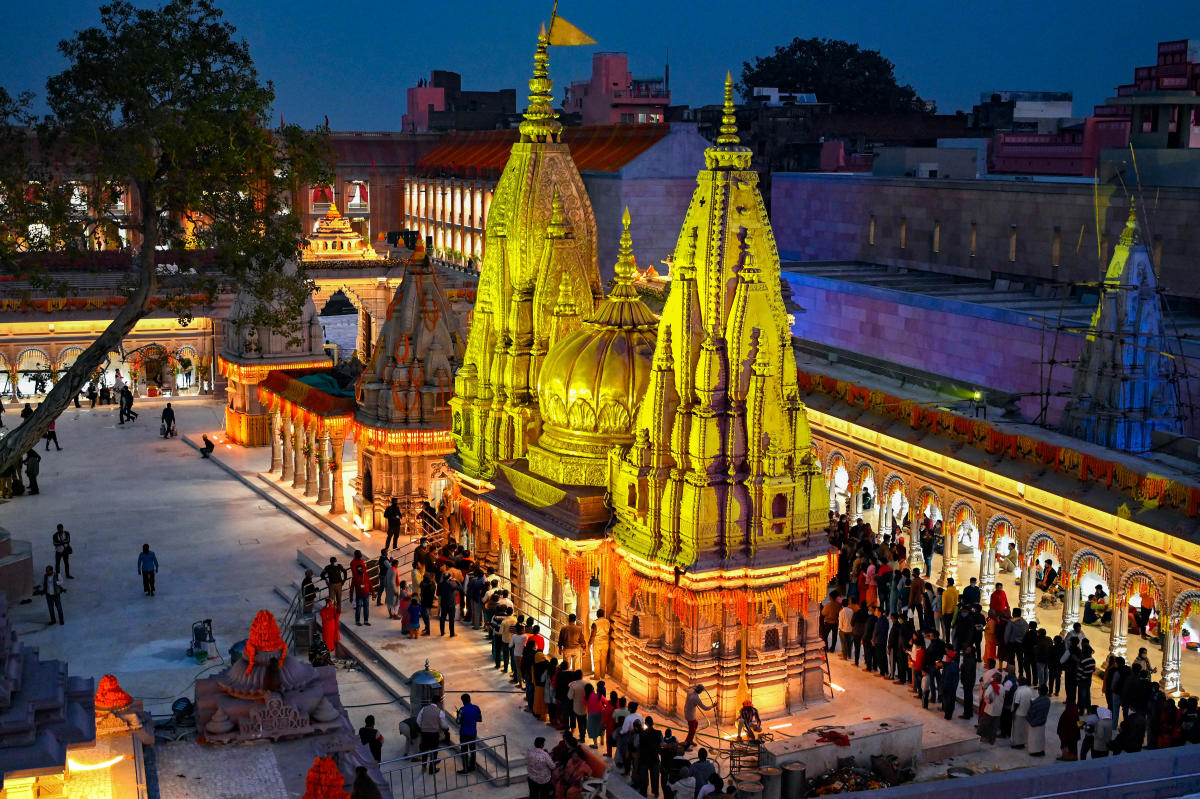 How to Reach:-
From East:-Kolkata-> Dhanbad-> Dehri-> Kashi Vishwanath , approximate 670km
From West:- Udaipur-> Chittorgarh-> Kota-> Prayagraj-> Kashi Vishwanath aprroximate 1,120km
From North:-Dehradun-> New Delhi-> Etawah-> Kashi Vishwanath , aproxi.. 1,060 km
From South:-Nagpur-> Jabalpur-> Maugang-> Kashi Vishwanath , aproxi… 730 km
Story:-
The very first mention of the Kashi Vishwanath Temple can be found in the Puranas including the Kashi Khanda (section) of Skanda Purana. Interestingly, this temple has seen complete annihilation and rebuilding many times over the course of history. The first time the temple was destroyed was in the year 1194 by the hands of Qutb-ud-din Aibak’s army when he defeated the King of Kannauj. The temple was rebuilt during the rule of Delhi’s Iltutmish and was demolished again during Sikander Lodhi’s time. Raja Man Singh rebuilt the temple during Mughal Emperor Akbar’s rule. In 1669 CE, Emperor Aurangzeb destroyed the temple and built the Gyanvapi Mosque in its place.

Also known as the Golden Temple dedicated to Lord Shiva, it was finally rebuilt in the year 1780 by the Maharani Ahilyabai Holkar of Indore, the Maratha monarch. The temple comprises of two domes covered in gold donated by the Sikh Maharaja Ranjit Singh, the Punjab Kesari, while the Bhosales of Nagpur donated silver to the temple. Since 28 January 1983, the temple has become the property of Uttar Pradesh government and was managed by Dr Vibhuti Narayan Singh and later by the Kashi Naresh.

Temple open hours:-The temple opens at 2:30 AM and closes at 11 PM. However, after 9 PM, pilgrims are allowed to view the Lord from outside the sanctum only. The temple performs various rituals during this time. The devotees can be a part of these rituals, such as the morning, afternoon, and evening aarti.