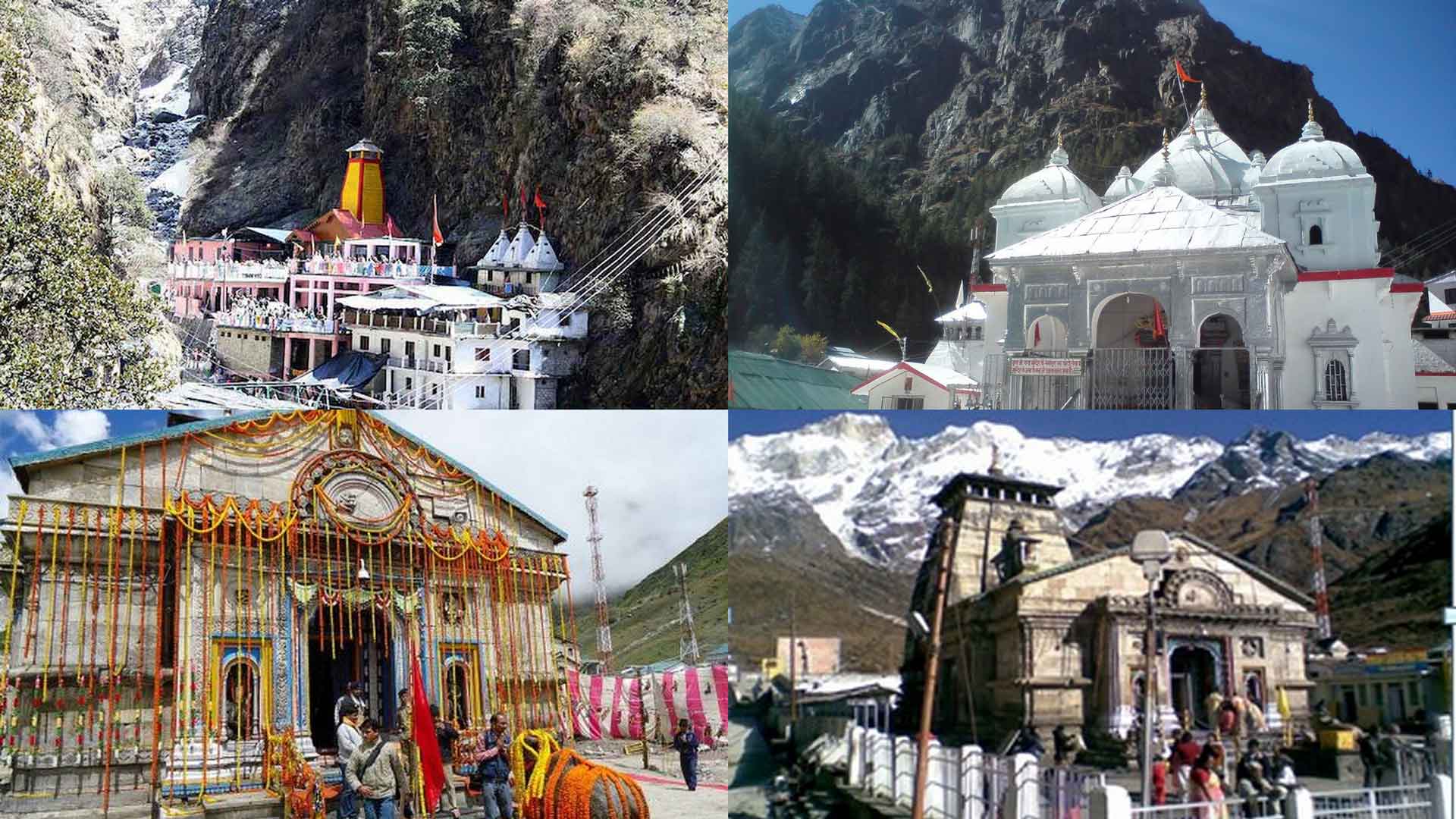 Best time to visit for Char Dham:-
Uttarakhand is a devotees’ treasury and undeniably Char Dham is one its concealed solitaires. All the four temples (Char Dham), Yamunotri, Gangotri, Badrinath, and Kedarnath remain open for just half a year from April or May to October or November. However, the exact dates are confirmed by the Mandir Samiti on the auspicious day of Maha Shivaratri. Like every year, this year as well the opening and closing dates have been announced by the committee. However, the dates are determined by the priest of the Bhimashankar Linga Temple.

Being located at high peaks, the temples of Char Dham witnesses a heavy snowfall during the winter season which forces the committee to close the shrines during winter season, making the months from April/May to October/November the only best time to visit Char Dham.

Char Dham of Uttarakhand or Chota Char Dham (small four abodes) is one of the most important Hindu Pilgrimages in India. It comprises of four most holy sites of Uttarakhand, namely – Badrinath, Kedarnath, Gangotri and Yamunotri. When and how these places got linked in a pilgrimage circuit together is not known. Each of the places has its own individual and legendary history. But perhaps it is the greatness and mysticism of each site that has qualified them to form a sacred pilgrimage tour.

Till 1950s going to the four most sacred sites of Uttarakhand meant embarking on a strenuous journey on foot through the hilly trails. People, like wandering sadhus, and those who could afford to travel with an entourage, were the most likely and regular pilgrims of Chota Char Dham. After the 1962 Indo – China war, India put massive efforts in building means of better connectivity to and infrastructure at border areas. Now the roads could take one till the nearest points of the holy abodes. This encouraged people from other backgrounds (economic or social) to initiate a tour of Char Dham circuit in Himalayas.

Legends:-Yamuna Goddess is believed to be Sun’s daughter and twin sister of Yama (the god of death). It is said that sage Asit Muni lived here and bathed in both Ganga and Yamuna. In his old age, when he was unable to go to Gangotri, a stream of Ganga started to flow across the steam of Yamuna.

Importance:-
According to Hindu mythology, Yamunotri is the origin of the sacred Yamuna River but Saptarishi Kund, 10 km from the temple, is the original source of the Yamuna River. Famous for its thermal springs and glaciers, the temple is among the important stopovers on the itinerary of the Hindu pilgrim.

2. HISTORY OF GANGOTRI
The picturesque pilgrimage in the hinterlands of the Himalayas is the most sacred spot where Ganga, the stream of life, touched earth for the first time.

According to Hindu mythology, Goddess Ganga took the form of a river to absolve the sins of King Bhagiratha’s predecessors, following his severe penance of several centuries. Lord Shiva received into his matted locks to minimize the immense impact of her fall. She came to be called Bhagirathi at her legendary source.
King Sagar, after slaying the demons on earth decided to stage an Ashwamedha Yajna as a proclamation of his supremacy. The horse which was to be taken on an uninterrupted journey around the earth was to be accompanied by the King’s 60,000 sons born to Queen Sumati and one son Asamanja born of the second queen Kesani. Indra, supreme ruler of the gods feared that he might be deprived of his celestial throne if the ‘Yagya’ succeeded and then took away the horse and tied it to the ashram of Kapil Muni, who was then in deep meditation.

The sons of the King Sagar searched for the horse and finally found it tied near the meditating Kapil. Sixty thousand angry sons of King Sagara stormed the ashram of sage Kapil. When he opened his eyes, the 60,000 sons had all perished, by the curse of sage Kapil. Bhagiratha, the grandson of King Sagar, is believed to have meditated to please the Goddess Ganga enough to cleanse the ashes of his ancestors, and liberate their souls, granting them salvation or Moksha.

Another Legend: Ganga, a beautiful vivacious young woman, it is said, was born out of Lord Brahma’s kamandalu (water vessel). There are two versions about this particular birth. One proclaims that Brahma washed Lord Vishnu’s feet after the latter got the universe rid of the demon Bali in his reincarnation as Vaman, and collected this water in his kamandalu.

Another legend has it that the Ganga came down to the earth in a human form and married King Shantanu — an ancestor of the Pandavs of the Mahabharat, yielded seven children, all of whom were thrown back into the river by her in an unexplained manner. The eighth – Bheeshma — was spared, thanks to King Shantanu’s intervention. However, Ganga then left him. Bheeshma plays a pivotal role throughout the grand epic of the Mahabharat.

Importance:-
Nestled in the high and majestic Garhwal Himalayas, Gangotri, in Uttarakhand, is one of the char dhams, which are considered an important pilgrimage for Hindus. It is the highest temple dedicated to Goddess Ganga. The holy River Ganges originates from the Gangotri glacier, located here, and is called Bhagirathi.

3. HISTORY OF BADRINATH
Badrinath is considered one of the most holy places in Hindu religion. One of the 108 Divya Desams, Badrinath temple is part of both Char Dham and Chota Char Dham. Adi Shankaracharya found the idol of Lord Badri in Alaknanda River and put it up in a cave near the Tapt Kund. In 16th century, a Garhwal King got the temple erected, which has been renovated many times as a result of natural calamities. Sandwiched between Nar and Narayan peaks, the beauty of Badrinath Dham is further enhanced with the glorious background of Neelkanth peak.

Legends:- As per one of the legends, the indulgent lifestyle of Lord Vishnu was criticised by a sage, after which Vishnu went to meditate as an act of penance, over here. Goddess Laxmi (his wife) became a berry tree to shade him from the sun and other harsh elements of nature. Another divine tale states that Badrinath used to be the realm of Shiva. Vishnu tricked Shiva into leaving the site and established himself instead.

Importance:-Dedicated to Lord Vishnu, the Badrinath Temple is one of the most important pilgrimage sites in India. It is among the four holy places or char dham, which are much revered by Hindus. Devotees undertake a strenuous journey through the mighty Himalayas to reach this holy shrine.

4. HISTORY OF KEDARNATH
Kedarnath is famous shrine for Lord Shiva devotees. As per mythology and legends, there are various stories associated with Kedarnath Temple.

Legend 1: Legend goes that Nara and Narayana – two incarnations of Vishnu performed severe penance in Badrikashraya of Bharat Khand, in front of a Shivalingam fashioned out of earth. Pleased with their devotion, Lord Shiva appeared in front of them and said that they may ask for a boon. Nar and Narayan requested Shiva to take up a permanent abode as a Jyotirlingam at Kedarnath so that all people who worship Shiva shall be freed from their miseries.
Legend 2: According to another legend, the place came into being during the period when the five Pandavas brothers were asked to seek Shiva’s blessings purging them of the sin of killing their cousins. Lord Shiva unwilling to give darshans to the Pandavas filed Kashi to live incognito in Guptkashi, where eventually he was detected by the Pandavas. Besides, yet another popular legend related to Kedar Temple, Goddess Parvati worshipped Kedareshwar to unite with Shiva as Ardhanareeswarar.

Bhairon Temple: A little away from Kedarnath is a temple dedicated to Bhaironathji who is ceremoniously worshipped at the opening & closing of Kedarnath Temple. The belief is that Bhairavnathji protects this land from evil during the time when temple of Kedarnath is closed.

Kedarnath (Famous Jyotirling)
The lingam at Kedarnath, unlike its usual form, is pyramidal and is regarded as one of the 12 Jyotirlings. Lord Shiva manifested in the form of Jyotirlingam or the cosmic light. Kedarnath is highest among the 12 Jyotirlingas. This ancient and magnificient temple is located in the Rudra Himalaya range. This temple, over a thousand years old is built of massive stone slabs over a large rectangular platform.

Importance:-Pandavas were supposed to have pleased Shiva by doing penance in Kedarnath. The temple is one of the four major sites in India’s Chota Char Dham pilgrimage of Northern Himalayas and is the first of the Panch Kedar pilgrimage sites. This temple is the highest among the 12 Jyotirlingas.

. This temple is the highest among the 12 Jyotirlingas.