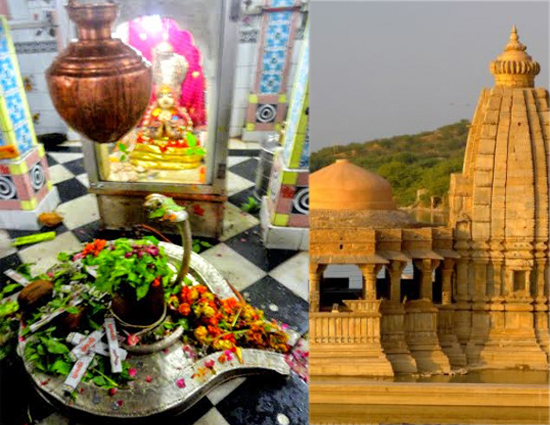 There is a temple of Gokarneshwar Mahadev on the banks of river Banas in Tonk district which is famous for its natural environment and mythological history. Here Ravana (Dashanan), the greatest devotee of Lord Shiva, had worshiped for many years to please him. He attained opulence by the penance of Shiva.This temple present at Triveni Sangam of Bisalpur Dam attracts people towards it. Due to the Bisalpur dam, people also come here to visit.
There are innumerable Jyotirlingas of Mahadev in the whole world, but mainly there are 12 Jyotirlingas. Apart from these, there are 108 sub Jyotirlingas, out of which Gokarneshwar is the head of Mahabaleshwar. The temple of Gokarneshwar Mahadev, located near the Bisalpur dam, is built from ancient times, its story is related to Dashanan Ravana, who is considered to be one of the great devotees of Lord Shiva.
This is where Ravana had worshiped hard for thousands of years, being pleased with his penance, Lord Shiva gave him a Shivalinga in the form of Atmalinga and also said that wherever you keep it, it will be established, after getting the Shivling when he When they started going to Lanka, the gods thought that if Shivling was established in Lanka.If it would be difficult to defeat him, then he created such a situation with the divine power, due to which he had a severe short-sightedness, due to which he kept the Shivling the same and due to which that Shivling was established the same. Here this Shivling was Swambhu which was not installed by anyone.
The story of calling the Shivling present here as Gaukarneshwar is also interesting. According to scholars, the temple of Gaukarneshwar Mahadev located in the Bisalpur dam has mythological significance, under which the name of this place is also called Gaukarneshwar Mahadev after the name of Mahatma Gaukarna.
That Mahatma Gaukarna had made his brother Dhundhakari listen to Shrimad Bhagwat for a week here to attain salvation, so this holy place is also considered to be salvation. Due to the same Triveni Sangat, this place is revered, because it has been said in the Puranas that where three rivers meet, it automatically becomes a pilgrimage.