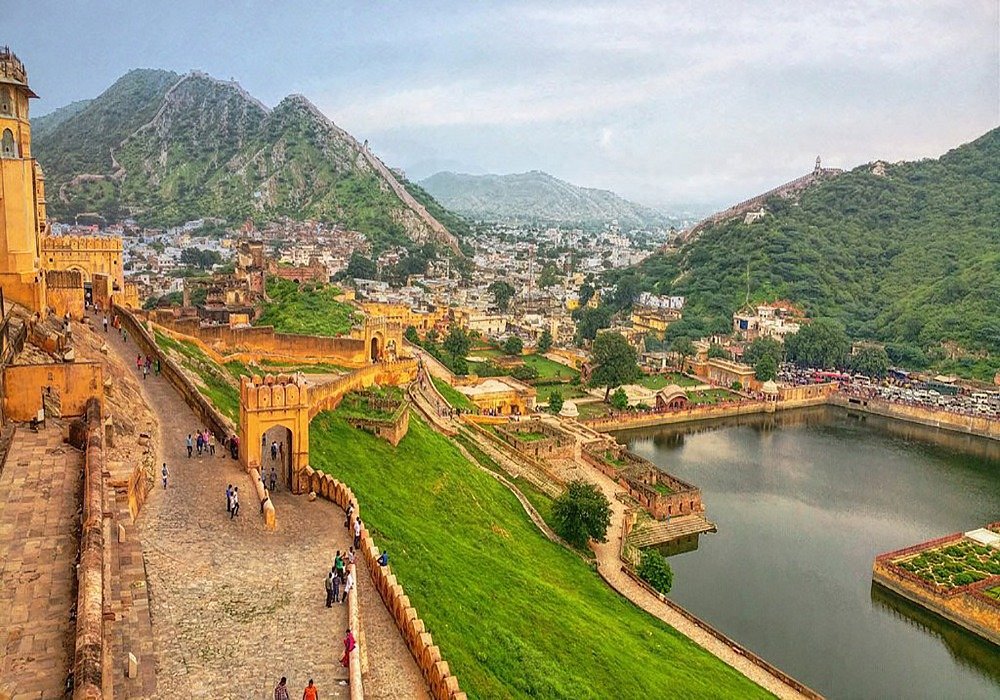 History:-
History also says that Jaigarh Fort is as old as the Amer Fort. The fort was built by Meenas during their rule in Amer. Since they worshipped Goddess Amba so they named the town as Amer or Amber.

Jaigarh Fort under Kachwahas
Kachwahas took over the city of Amer from Meenas and ruled during the Mughal period and later. During the rule of Aurungzeb, the fort was given to Raja Jai Singh II who renovated the fort. Raja Jai Singh also built the city of Jaipur which was his dream project. Like Jaigarh fort, Jaipur was also planned by Vidyadhar.
Jaigarh Fort during Mughal Period
During the Mughal period, the fort was used to keep weapons which was used in the wars. During the rule of Shah Jahan, Dara Shikoh looked after the work in the fort. When he was killed by his brother Aurungzeb, the fort came under Raja Jai Singh who renovated the fort.

During the rule of Akbar, Raja Maan Singh accepted to come under Akbar’s rule through a treaty. It was stated in the treaty that the kingdom that Maan Singh will win will come under Mughal rule and the treasure will belong to Maan Singh. He won many places in Afghanistan and others and got a huge treasure which was kept in Jaigarh Fort. Jaigarh Fort is also known as Victory Fort as nobody was able to capture the fort.
The walls of the fort are very thick and are made up of red sandstone. The length of the fort is 3km and the width is 1km. There are many structures built inside the fort which include Laxmi Vilas, Lalit Mandir, Aram Mandir, and Vilas Mandir. Besides all these, the fort has a beautiful garden which still exists. The largest cannon on wheels, known as Jaivana, is also there in the fort.

Things to Do
There are various attractions near Jaigarh Fort and you can cover many of the places in a day’s tour.

Interesting Facts About Jaigarh Fort
1.Jaigarh Fort was one of the main cannon foundries during Emperor Shah Jahan’s rule as there were many rich iron ore mines in the region.
2.Did you know that two former rulers of Jaigarh Fort, Major General Man Singh II and Sawai Bhawani Singh also served in the Indian Army post Independence?
3.The main attraction of the fort is the Jaivana Cannon, one of the largest cannons at the time, weighing 50 tonnes and having a 20.19 feet barrel and 11 inch diameter. As the canno rests on four wheels instead of two, it could be turned in 360 degrees, thus making it possible to fire in all the four directions. Since, there were no bitter relations with the Mughals then and there was peace, the cannon was fired only once.
4.Though a strong and beautiful fort, it was never home to any rulers but was mainly used for manufacturing artilleries.
5.Built of red sandstone, this is a fortified fort and still maintains its magnificence and pride.
6.It is the watchtower that is the best place in the fort to be as it gives an astounding view of the splendid environs.
7.There are two temples within the fort premises – Kal Bhairav Temple was built in the 12th century while the Ram Harihar Temple is a 10th century construction; a must-visit.
8.Jaigarh Fort was in news in 1977 when the then Prime Minister Indira Gandhi was said to have launched a treasure hunt in the fort premises. Though the search by an army unit continued for three months, they didn’t find anything. Bad news for others but good news for the fort as it was left undisturbed.

Importance
Jaigarh Fort was a centre of artillery production for the Rajputs. It is now home to the Jaivana – at the time of its manufacture in 1720, it was the world’s largest cannon on wheels of the Early Modern Era. The foundry where it was manufactured is also located here.